Sevens are notoriously unlucky here in Bordeaux. There has been one outstanding vintage ending in a seven but that was back in 1947. Everyone has heard of the catastrophic very late frosts that hit at the end of April last year when vegetation was well developed (2 weeks in advance than normal). But what is the impact on the wines produced? The wines of 2017 were unveiled this week at the annual primeurs (future) tastings here in Bordeaux. Opinions have been trickling in after this, the busiest and most important week, in the Bordeaux calendar. And what is the verdict? A whole mixed bag depending on the impact of the frost. Normally we like to say that one grape variety surpassed another, that it was a Right or Left Bank vintage …this pigeonholing is not possible this year.

There are four main categories;

3. Vines partially hit by the frost but went on to reflower and a second generation of grapes were produced – how to best pick (and when) was the dilemma here and how best to incorporate the two very distinct batches picked at a three week interval.

4.  Vines 100% hit by the frost with no regeneration and no wine produced (my partner made one vat of wine instead of 14 this year, so tasting other people’s primeurs was not at the top of his list this year. It wont be until 2019/2020) when the lack of bottles to sell will become a financial constraint) 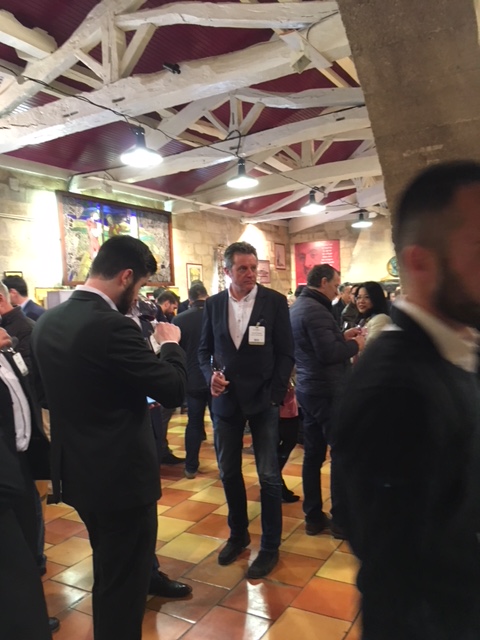 Three days of tasting of around 6000 wine buyers and press from around the world (China, UK, Switzerland, Germany, USA). Organised by the UGC (Union de Grand Cru) who have 135 member châteaux. Suffered from a recent number of châteaux who decided to host their own primeur tastings ‘at home’ particularly in St Emilion (such as Canon, Trottevielle, Figeac, Beausejour Bécot but who came back this year and host their own too – most châteaux organise tastings like this by appointment). In addition there are hundreds of other tastings offered during this week by winemaking consultants, or groups of châteaux.

Its got so easy to taste the Primeur here in Bordeaux. Gone are the days of austere tannins that produced long, long living wines the tannins of which took decades to soften. Then in the 80s Bordeaux began to understand more about ripeness but oak flavours were all the fashion and the wines with big shoulder pads irrelevant of the style of the year.

The 15s and 16s were made in a precise way with pure fruit but with less intervention (plot by plot viticulture and vinification). Many producers were not tempted to produce blockbuster wines, though they could have. Black teeth we still all have but it is not such a backbreaking task anymore it seems. 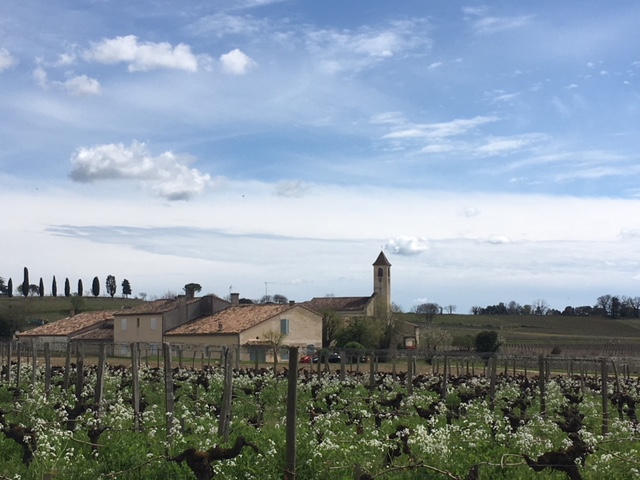 The trend continues we see with 2017 (forgetting about the catastrophic but localised frost) the season was sunny and dry and produced some pure fruity wines with medium tannic structure and freshness. Some wines had a slight bitter finish. It’s a good vintage with smaller quantities.

Those pouring the deep coloured black fruit smooth wines at today’s future tastings in St Emilion were smug and happy (UGC tasting at la Couspaude Grand Cru Classé). It has been a battle to get to this point with the wine still languishing  in the barrel.

Troplong Mondot 85 Merlot 13 CS 2 CF big and rich but quite a bitter finish.

Canon la Gaffeliere 16 hl/ha instead of 32 hl/ha; 60 Merlot 30 Cab Franc 10 CS; Fertilizer helped their old vines to recover from the shock and go onto produce a Second generation of grapes.

1st generation of grapes were picked mid september. Vines were well marked to indicate when to pick! There was no pressure from botrytis so the later grapes were given time to ripen and profit from the sunny autumn. Not picked before mid October. What it resulted in was a wine that was richer and more exotic than normal! Subtle oak use of 55% new wood  plus use of bigger oak barrels too (less oak contact).

Only 50% was produced this year due to the frost damage despite using helicopters to move the heavy cold air around on their best plots of Cabernet Sauvignon. Harvest took place over a four week period (7th September to 3rd October) after the shock of the frost the vines went on to flower again and produced a second generation of fruit. This was picked late into the season, often requiring several passings through the same vineyard at different intervals to pick the fruit when it was really ripe. They used a drone to help identify the different categories of vine damage from the frost. 20 000 vines were marked with coloured ribbons to indicate which category they belonged to and when they should be picked. The precise and very detailed work that took place throughout growing season of 2017 (like ‘haute-couture’ as Mme Marie-France Manoncourt likes to call it) the wine produced is fresh, smooth, silky, blackberries and cream with a long finish (47% Cabernet Sauvignon, 43% Merlot and 10% Cabernet Franc – the grape variety to suffer the most.

A massive development is taking place at Figeac over the next two years with a gravity winery and cellars being built behind the current offices. In the usual style of Figeac it is a local firm of architects that is doing the design and works, not a fashionable international name like other chateaux in the neighbourhood.

Hopefully, this will help in their journey to reach the holy grail of becoming one of the privileged Premier Grand Cru classé A, but hopefully Figeac will remain the connoisseurs wine that it always has been without the price tag of their elite category. 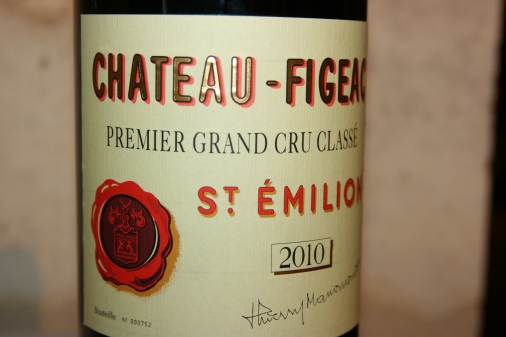 Restored confidence in the primeur system in Bordeaux after the astronomic prices of 2009 and 2010, the disastrous 13 and unsexy 2011 and 2012. World market share dropped to 68% compared to 98% in 2010 (trade by value). The slack was taken up by Northern Italy and Burgundy. The share of the top growths within that total also dropped making way for some less sexy names to become the new must-haves.  There seemed to be more Asians around this year….talking to a lovely Japanese sales guy, he was hoping for a return to 2014 prices after the exorbitant prices of 2015 and 2016 for this vintage. We can always hope but there have been some big changes in Bordeaux since then. Bordeaux has come of age and realised that it is part of the world luxury market.

The old backwater of Bordeaux has woken up with its dynamic mayor Alain Juppé recognising its potential consistently since 1995 when he first became mayor of the sleepy sooty city with its staid Bourgeois families that were tied in knots with family politics (written about by Bordeaux’s wine middle class François Mauriac). Paris is now only two hours away and has rubbed of its chic dynamism on the people, streets, restaurants, cafés, wine bars……..parking, traffic, house prices!

Wines from these classified châteaux that are emulated around the world, are rare luxury products. They are limited edition. It does not make sense for châteaux owners to drop prices. Even in more difficult vintages so much ‘haute couture’ attention is given to each vine that very good wines are made each year if not great.

Over the past two years estates that could afford it have held back stocks and not released everything through the futures marketplace. This was started by Château Latour (owned by François Pinault, Artemis) who keeps all of his stock for sale at a later date when the wine has matured – at a more expensive price! Many châteaux in Bordeaux are now owned by luxury and top-end brands such as LVMH, Chanel, Dassault…..They dont need the injection of cash flow that the futures system gives châteaux to pay for the barrels. This has helped to keep prices high. The weak US dollar will not help the USA become major players either this year.