Everyone had their ideal date this year to harvest. For most it was 14th October. Nature had another idea in mind! Most started at least one week to ten days before their optimum. The actual start was Monday 30th September enforced by nature (some even the weekend before) to get as much of the Merlots in before the rain storms arrived on Friday 4th October. Everyone was in a rush suddenly so there was a great early demand for pickers (100s needed for the large Medoc estates, a problem as students had already returned to university). In all régions we could see armies of pickers rushing to finish. The week up until Friday 4th kept dry and sunny. Mouton this last weekend invited their office staff to pick (from Thursday 3 to Sunday 6 October) to get the grapes in. After the deluge of Friday 4th picking continued particularly for the Cabernets and nature after a somewhat wet and muddy weekend let the workers have a sunny week with cool morning températures of around 9°C warming up to 26°C durng the day during the 2nd week of October.

Good dry white wines were made in 2013 with its warm dry July and August. Most of the Sauvignon Blanc and Semillon grapes were harvested around mid September in warm dry conditions.

Record Early for the Sweets before most reds!: The sweet wine régions unusually began to harvest before the reds this year with the fine outcrop of noble rot which came early. Many started around 26th September picking their first ‘trie’ of botrytised grapes by the bunch (also unusual). Their harvest continues a number of weeks and the same plot is picked a number of times searching for the perfect stage of rot. It is the same rot that the others fear and here too with many bunches being discarded due to the grey rot. If there is continued humidity the grey rot develops. Only if there is sunshine following the wet, foggy mornings will the rot evolve in the right direction.

Here at Yquem there were many smiles.

The clever red wine producers got most of their Merlot in before 4th October. The Dubourdieu estates in the warmer Graves region were able to get everything in before including the Cabernets due to the odd ‘nuit blanche’ (all nighters!). They do not spray with anti-botrytis which enables them ironically to harvest a riper crop before the rest (the vines apparently suffer a shock when sprayed which delays ripeness) according to Jean-Jacques Dubourdieu. 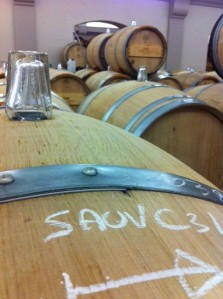 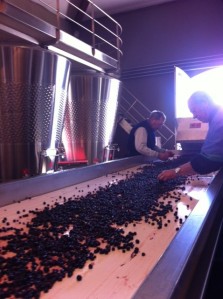 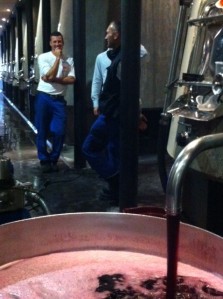 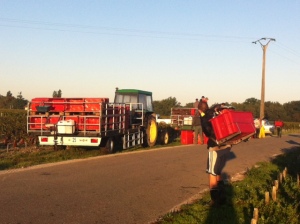 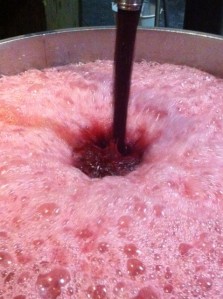 So the choice was to pick slightly unripe or risk rot and minuscule yields. Unless you were on the cold late harvesting terroirs such as the limestone plateau in St Emilion and Fronsac when you had to wait. They started on 7th October (such as Beausejour Becot on the plateau of St Emilion) and are busy harvesting at the moment.

Yields are low due to the aborted berries due to millerandage and coulure in the Merlots (due to rain at flowering). Many have had yields halved harvesting 20hl/ha instead of 40 on both the Right and left bank. Also due to wet conditions causing extensive rot. 2012 and 2011 were small harvests too. The last ‘big’ vintage was 2009. This year yields are down by at least a quarter predicts the CIVB (the promotional body of Bordeaux wines). This will have a big knock-on effect for the wine producer’s income with at least a quarter fewer bottles to sell. Some producers in the Entre-Deux-Mers have nothing to harvest this year due to catastrophic hail that caused widespread damage.

The CIVB which is financed by payments based on sales are predicting a loss of revenues of a quarter (between 4 and 4,5 millions hecolitres down by 25% on a normal year).

Sorting better by hand than by machine

As most of the berries, particularly the Merlot, this year not fitting the ideal shape and size, the optical sorting machines have been rejecting much of the crop. Around 40% in some cases. The teams of sorters can be more understanding about the key berries to reject.

There is some beautifully healthy Cabernet Franc on the right bank in St Emilion and Lalande de Pomerol that is currently being harvested. Here at Château Béard La Chapelle, St Emilion Grand Cru. 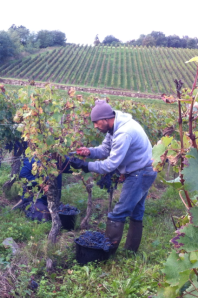 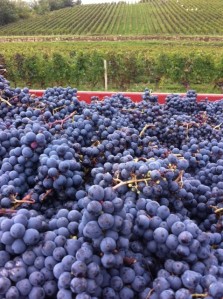 With skins that are not ideally ripe, most winemakers are going very easy on the extractions, for example one third of the volume of a vat five times a day at the beginning of the fermentation when the alcohol levels are low. Once wine (density passes from 1080 to 980) there is only a gentle wetting of the cap. Cold soaks are rare this year.

Mouton however are doing a ‘delestage’ rack and return once a day (normally only once during the fermentation for most producers)!!