St Emilion is my very favorite place to visit. It is the only one of Bordeaux’s wine regions to have a worthy heart and is well worth dedicating a day to visit its wine region.

Its not just its wonderful cloisters, its cobbled streets that wind and turn revealing beautiful old buildings, its old falling down monuments as much above as underground in cool limestone tunnels, its views over terracotta rooftops and seas of striped vines, its hidden corners of rows of vines basking in  the sunlight…………..it is the special feeling this medieval town gives off through every pore of its being. Its history is mixed; a good dose of religion, stone quarrying and of course vine-growing which creates the interesting blend that is St Emilion today. 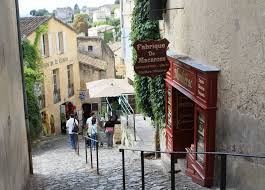 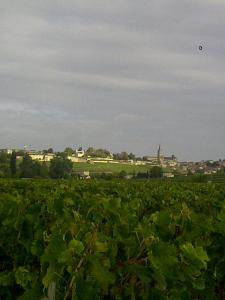 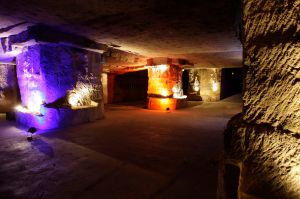 History: St Emilion is spiritual. It is a sanctuary. And that is exactly what it was to the Benedictine monk, Emilian who came to this limestone plateau to escape from his notoriety in the 8th century. He performed some miracles in Brittany (turning logs into bread, the usual miracle sort of thing) and wanted to escape his renown, find a retreat and get back to basics. He found sanctuary in a cave near a spring on this limestone plateau (which you can visit in an underground tour organised by the Tourist Information every day in English at 2pm cost 7€). Over the years he was joined by other monks who started to dig out a Church from a single piece of limestone. It took close to 300 years to complete and represents today Europe’s largest monolithic churches. The town, known as St Emilion, attracted many different religious orders and over time many monuments were built.

The limestone plateau on which the town was located was excavated for its stone which built all of the region’s stone buildings. Today it leaves 200km of tunnels under the town.

Secret St Emilion, not to be missed;

The origins of Vine-growing in St Emilion: Vines were first recorded to have been grown in St Emilion in the 1st century documented by the Roman poet Ausonisus (after which the Château Ausone is named being on the grounds of his Roman villa.

Which properties to visit: Once you get to St Emilion (about 40 minutes from Bordeaux centre by car) the vineyards lie around this medieval town which lies at its epicentre. As appellations go in Bordeaux, St Emilion is large, 5400 hectares worth.

As you have probably already remarked when you order a bottle of St Emilion, what you get is very varied. Part of the reason is that there are very different styles of St Emilion, this comes down to its different soils. There are at least six soil types that range from deep sands to gravel and of course the limestone plateau.It is interesting to visit properties located in these different soils. As you get towards the gravel on the borders of Pomerol, you wonder which appellation you are in! Merlot is the queen grape here but some Cabernet Franc creeps in in the finest properties (see below).

It is interesting too to visit smaller properties, not just the classified growths. There are around 1000 châteaux in St Emilion and only 90 or so of them are ‘classified’.

St Emilion classified its châteaux in 1955 exactly 100 years after the famous classification of the Medoc. It is the only one that is renewed evey 10 years and makes the local lawyers rich with the number of court cases that result from it (the newest judgement since its publication in October 2012 has caused much controversy seemingly being based purely on price rathr than terroir see my blog article https://nicollecroft.wordpress.com/2013/06/16/fishy-goings-on-in-the-not-so-down-to-earth-st-emilion/ . It is broadly speaking a two tier classification with Premier Grand Cru Classé (split into As and Bs) at the top and the Grand Cru Classé (St Emilion Grand Cru is not a classification as such as anyone can add this to their labels, but the wines are generally tasted at bottling to check their superiority).

The two original ‘A team’ represent the diverse range of St Emilion wines.

Château Cheval Blanc: near to Pomerol its gravely soils enable a high degree of Cabernet to be grown, unusual for a St Emilion. 58% Cabernet Franc, 42% Merlot.Total Number Hectares: 37. Bought in 1998 by Bernard Arnault France’s richest man – worth 150 million €.

(Château Figeac its neighbour has even more gravel, its 40 hectares is divided into 35% Cabernet Franc, 35% Cabernet Sauvignon, 30% Merlot).

As it stands today! New additions in bold. For a personal view see

The neighbouring appellation of Pomerol is also  well worth visiting. Its soils are quite different with thick clay often with iron deposits. It is one of the smallest appellations in Bordeaux (800 ha and 140 producers, average size of vineyards is very small). It is home to some of the world’s most expensive wines most of them coming from its plateau. It lies on the pilgrim route and is the home to an ancient hospice (site of the Château du Gazin).

Château Petrus: 11.5 ha with predominance of Merlot 95% and 5% Cabernet Franc

First hit of frost in Bordeaux. It helps if the canes have not yet been bent down (pliè) and attached to the bottom wire. Next Tuesday negative temperatures are forecasted. Large round bales of straw (250kgcost 25€) are arriving and large candles (cost 10€ each and you need min 300 per ha - can use them twice). The coldest moment in the night is at sunset currently at 6.30am. #frostrisk #changestoworryaboutsomethingelse
You can almost hear nature's sigh of relief as we pollute less during this time of confinement, as we interfere less in nature's clever cycle #naturesgotitcoveredifweletit #bee #beeanddandelion #yellow
To think that this was just 2 weeks ago on my last wine tour - at Margaux's Chateau #d'Issan. Life hasnt changed much for the ducks! I only know of another moated wine chateau with water in it and that's Chateau Olivier Pessac Leognan. (And historic Chateau Labrede, Montesquieu's home which was another highlight of last summer - will post a photo later). #ducksmoat #familyownedchateau #sipwinetoursbordeaux #wateroffaducksback
One of my best memories from past summer ( yes! there will be more!) Is my #seafoodandsunset evening on an authentic oyster boat @bordeauxsurleau see my Bordeaux Blog article nicollecroft.wordpress.com #sipwinetours #offbeatenpath #seebordeauxdifferently #30yearsin bordeaux #sipbysipwinebook #editionssudouest #keeppositive
When there is growth there is hope. 'He is richest who is content with the least, for content is the wealth of nature'. Socrates. #merlotyoungleaves #2020vintage #newbeginnings Just think by the time we will harvest these grapes this will be behind us. Just trying though to be present in the moment and appreciate all we have today. ❤
One of my all-time wishes is to start the day with a mug of English tea brought to me in bed. Even in these tough times, dreams can come true. #keepcalmanddream