Here are some of my favorites from the 30 or so producers supported by these oenologists attending this press tasting;

2010; This predominantly Merlot wine is voluptuous and rich with its intense blackcurrant and black cherry fruit, ripe yet keeping the fruit’s freshness. The concentrated fruit aromas are complemented by a myriad of other flavours such as spice, coffee, dark chocolate and cream. Its volume is supported by a firm structure which gives way to a long complex finish.  Truly an oustanding wine.

2011; The 2011 vintage is much fresher and juicier and has the aromas of a spring meadow with its intense perfume of violets and wild mint. Along with its fresh fruitiness one can find cream and light caramel notes. Surprisingly well-intergrated for such a young wine. 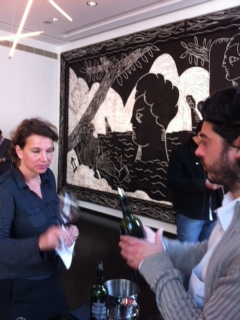 Ludovic Battistin is the owner winemaker of this interesting property which has as its neighbours Domaine d’Aiguilhe (von Neipperg) and Johanin-Bécot of Beausejour Bécot in the Côtes de Castillon (today part of the Côtes appellation and known as Castillon Côte de Bordeaux). His vines lie on slopes of pink clay which overlay limestone bedrock.

Exotic aromatic nose, concentrated and rich with good structure which gives pleasant austerity and balance to the richness. Freshness on the palate.

Pale silvery colour tinged with light pink gives no clues to what lies behind this very serious rosé that has the complexity of a well-made white wine. Good structure, balance, very fresh and aromatic. The Cabernet Franc vines are grown in thick blue clay soils which are very cool.

Isabelle 2009; Attractive fruity nose of spice and blackcurrant, fresh and juicy on the palate with firm finish. A wine that is light and well-balanced.

The Famille Portet based in Soussans run this 38  hectare estate in Margaux one of the Haut Médoc’s largest appellations. They use 35% new oak for their wines. 60% Cabernet Sauvignon, 35% Merlot, 5% Petit Verdot

2008; Cherry notes on the nose with a thickness on the palate supported by good structure. Medium body with medium long finish.

This wonderful property located on the southern slopes of St Emilion just above the Route de Castillon,  is owned by Jean-Philippe Caille.  François Capdemourlin as the Maitre de Chai (you can tell by his wne stained hands), presented for the first time the 2011 vintage.

2011; Harvested between 16 and 29 September (the last to harvest in the area), this wine has an enticing exotic nose of spice and blackcurrant. Thick and expressive on the palate, it is a wine “de plaisir” for earlier drinking than the oustanding 2009 or 2010 vintages.

This property and the St Emilion Grand Cru Fonroque are owned and were presented by Alan Moueix, Bordeaux’s biodynamic man. He claims that producing biodynamically gives the wines “more energy, freshness, vitality, a purity of expression and accentuated floral characteristics” from the attention payed to the soil the vines grow in and the softer treatments to the vine itself.

2006; Rich cassis aromas, firm but uplifting use of wood. Made with 50% biodynamic grapes (under conversion)